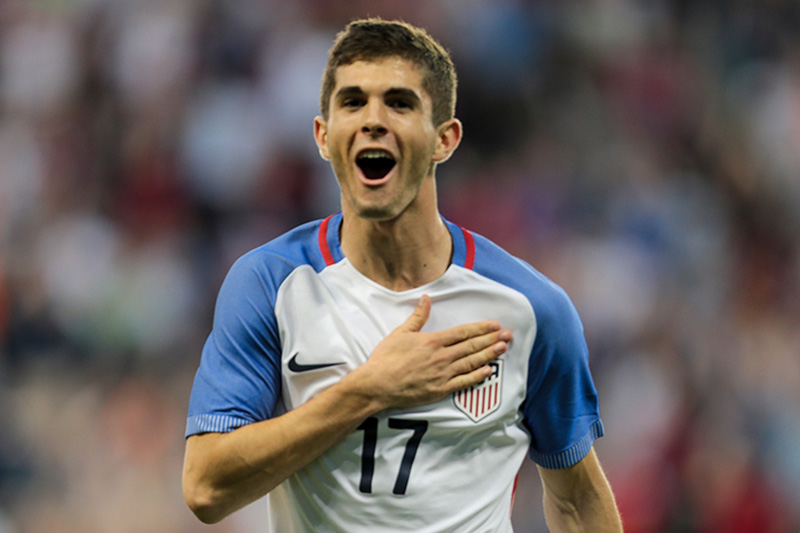 I get asked every once in a while, “who is the best soccer player you’ve ever played against?” Having played Division 1 soccer at Georgetown for five years, semi-professionally with DC United U23’s as well as stints on trial with DC United and the Tampa Bay Rowdies, I’ve certainly played against several elite players. I’ve played against Herman Trophy winners Joseph Lapira and O’Brien White, International heroes like Andre Blake and Jaime Moreno, and MLS all-stars like Charlie Davies and Dwayne De Desario. The answer, however, is clear as day … that is, 19-year-old Christian Pulisic.

At the time I played Pulisic, he was merely 15 years old … and needless to say it was a humbling experience. He was playing with the U17 US Men’s National Team down at IMG Academy in Bradenton, FL against my amateur men’s team, the St Petersburg Kickers, a perennial men’s amateur powerhouse and national champion contender. Despite our Kickers team being made up of ex D1 college guys and ex pro’s in their “prime” (20’s and early 30’s), we lost to Pulisic and their group of 15 and 16’s year olds by a score of 4-1, with Pulisic leading the way with a few goals to his credit.

As difficult a score-line that is for me to admit; at the time, I’m not sure I would have readily said that the little 15-year-old center midfielder was the best player I had ever played against. He wasn’t running by anyone or muscling people off the ball (given his age and physical maturation), but his technique, vision and ball control were unquestionably the best on the pitch (despite being half the age of many).  And with a hat-trick and an assist in the stat sheet, he was clearly the man of the match.

Featured on CBS’s national “60 Minutes” last Sunday night, Pulisic has already become a celebrity and the face of American soccer. In fact, US Men’s National Coach, Bruce Arena, calls him soccer’s “first American superstar.” Despite the lofty words, it’s hard to argue. Earning $8 million a year with one of Germany’s top clubs, performing better than any other US National Team member at the moment, and having just turned 19 two weeks ago, I tend to agree with Coach Arena’s proclamation as the first American soccer superstar.

Why is he different? What has allowed Pulisic to stand out this much in a country that is continuously ridiculed across the world for their lack of homegrown soccer talent. Before we talk about the play, I think it’s actually more important to understand the environment he has been put in (as well as removed from) to allow him to grow and mature as a player.

As much of a team game that soccer is (more than any of the top 4 American sports – baseball, football, hockey and basketball), the importance of the playing environment a youth player acclimates too, is exponentially magnified.

In looking at Pulisic’s actual game, there are really three attributes that he possesses that have allowed him to transcend the rest of the talent pool in the United States. And quite frankly, after Pulisic, should be weighted heavier when evaluating youth talent in this country. The first is God-given, and that is the combination of his low center of gravity (5’8’’) and speed. This allows him to dribble the ball more aggressively and effectively at defenders than any other player we’ve ever seen in this country at his age. Second … his technique. This may be his greatest asset. His touch, two-footedness, and range of pass, are the things that are immediately apparent when watching him play. His last attribute is largely environment-driven, and that is, his decision-making and vision. Pulisic plays as though he’s been playing at the international level for years (which he has, just not for very long with the US Men’s National Team). His 7 goals in 18 international games speak to his composure on and off the ball, ball speed, and decision making in the attacking third at the game’s highest level.

Hyping youth talent seems to have become a sports media cliché in the modern era. But numbers don’t lie … this kid has been better than the best in the game were at his age. And on Friday night, the United States plays in their most important game since their 2014 World Cup elimination game against Belgium, when they take on Panama in a World Cup Qualifier in Orlando, FL. The United States currently sit at fourth in World Cup Qualifying while Panama sits at third, with only the top 3 advancing to the 2018 World Cup. A win secures the US greater than a 90% chance of qualifying, while a loss would dramatically decrease their chances to 44%.

We’re at an incredibly pivotal time for the game of soccer in this country and the US National Team. We’re at an equally pivotal time in Christian Pulisic’s career, as he attempts to qualify for his first ever World Cup.

The country will be watching on Friday night.