The Best Weekend Ever in Sports? 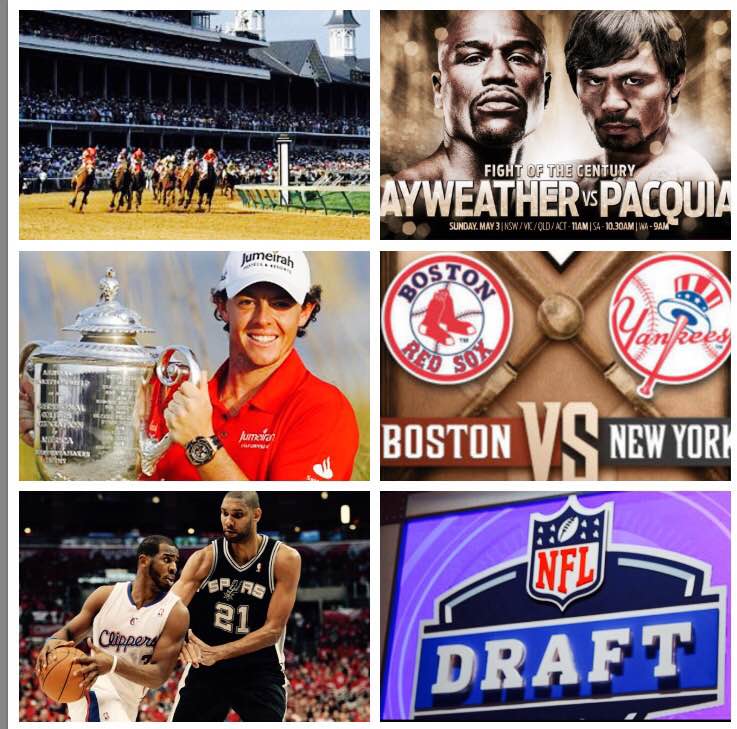 This past weekend was perhaps one of the best weekends in recent sports history. Between the Fight of the Century, the 141st running of the Kentucky Derby, the NFL Draft, Red Sox/Yankees, Spurs/Clippers game 7, and the World Golf Championships in San Francisco, there was definitely plenty to watch. And according to a Harris Poll, many did watch, as 52% of US Adults said they would watch, listen or attend one these events.

Well what did we learn from the weekend?

The Fight of the Century, MayPac, seemed to gain the most hype from the weekend, although it certainly didn’t live up to the billing. In what was a classic defensive masterpiece by perhaps the best defensive boxer of all time, the audience was left largely disappointed. In an event-based sport that has largely become non-existent since the rise of MMA, the sport’s biggest event of the century fell flat on its face. It wasn’t the fight of the century. It was a retirement plan.

The Kentucky Derby provided more fireworks this past Saturday as Victor Espinoza won his second Derby in a row as American Pharoah narrowly edged out Firing Line with a time of 2:03:02 . A record crowd of 170,513 was on hands at Churchill Downs to witness horseracing’s biggest event of the year.

Bob Baffert, American Pharoah’s trainer, received lots of the media attention following the race as he captured his 4th Kentucky Derby victory. His other horse in the race, Dortmund, finished a not too shabby 3rd. And while the verdict is still out on weather American Pharoah as what it takes to capture the first Triple Crown since 1978, the Derby this past weekend certainly provided plenty of anticipation for the Preakness and the Belmont.

The NFL Draft, while being in Chicago for the first time since 1964, was largely uneventful. Jameis Winston and Marcus Mariota went 1-2 which was largely anticipated. Shane Ray, the Defensive End from Missouri, who lost out on millions due a marijuana possession charge earlier in the week, slid all the way to 23 where the Broncos decided to take a gamble on him.

The Florida State Seminoles took the crown for the school with the most draftees (11), and broke the record for the most amount of draftees in a three year span (29). The only other school to break double digits in number of players drafted this year was Louisville.

The Sox and Yankees was unexpected as the Yanks swept the Red Sox at Fenway for the first time since August 18-21, 2006. Arod hit his 660th home run, tying Willie Mays.

The Spurs and Clippers series came all the way to final second of Game 7 where Chris Paul hitting a running jumper as time expired to eliminate the defending NBA champion San Antonio Spurs. In a game that featured 31 lead changes and 16 ties, the game went back and forth.

And lastly, the world’s undisputed #1 ranked golfer, Rory McIlroy, reclaimed his plateau on top of the golf world after Jordan Spieth stole the spotlight momentarily with his Master’s win. Rory became the 3rd golfer in the last 75 years to have won 10 PGA Tour titles before turning 26, joining the likes of Jack Nicklaus and Tiger Woods. The victory, was Rory’s 18th match win at the WGC-Cadillac Match Play, where he improved to 18-6.

While MayPac may have let us down, the rest of the sports world kept us as entertained as ever.