US vs. Netherlands Points to a Bright Future for the Stars & Stripes 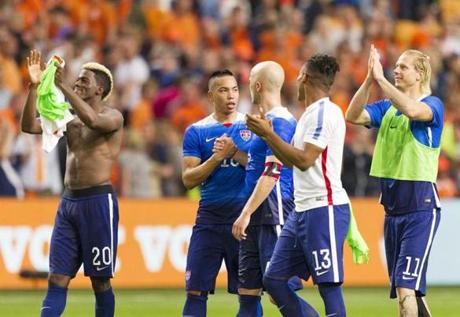 Sure it was just a friendly. Sure, the US roster had plenty of new names on it. Sure, the Netherlands held 62% possession and outshot the US 27-19. And yet Jurgen Klinsmann and the United States were able to overcome a 3-1 deficit to beat the Netherlands 4-3 for the very first time in history.

Not only had the US never won in the Netherlands before, but the US had never scored more than a single goal when playing in the Netherlands. Klinsmann put together a group of 22 players for this pair of friendlies against the Netherlands and Wednesday against Germany, that has a mixture of some older veterans and a healthy dose of younger up and coming players. It is a roster that lacks the regular names like Clint Dempsey, Jermaine Jones, Tim Howard, Jozy Altidore, Alejandro Bedoya or Graham Zussi and was replaced by names like Bobby Wood, Gyasi Zardes, Danny Williams and Jordan Morris. The lack of National Team regulars further contributed to the improbability of the result this past Friday.

Since Klinsmann has taken over the reigns as the US Men’s National Team Head Coach in July of 2011, the team has gone 3-3-2 against teams in the world’s top-10, including wins at Italy, at Mexico and now the Netherlands. With the win, the team improves to 2-0-1 in their last three games, going into Wednesday’s matchup against Germany. Furthermore, this win against the Netherlands speaks to the progress in player development amongst some of the rising young stars in the US. With guys like Clint Dempsey and Jermaine Jones getting well into their 30’s, the performances from such emerging stars like Bobby Wood (22 years old), Gyasi Zardes (23 years old) and Jordan Morris (20 years old) all speak highly towards the future of US Soccer.

The win over the Netherlands comes in the midst of a successful U20 FIFA World Cup for the Yanks. The US U20 squad has found themselves in the Round of 16, where they’ll take on Columbia on Wednesday after going 2-1 in the group stage. Moreover, the US Women’s National Team will begin play in the Women’s World Cup tonight against Australia. The US Women are among the favorites to win the whole thing. And lastly, the US Men’s National Team will close out an eventful summer for US Soccer with the Gold Cup, as they open up against Honduras on July 7th.

While this US win over the Netherlands should not be blown out of proportion, as it was merely a friendly; it certainly does speak to the potential of the future given the personnel they used to get the result they did. This result further demonstrates US Soccer’s improvement towards achieving their goal of becoming one of game’s leading nations. With the Women’s World Cup, the U20 World Cup and the Gold Cup upon us, US Soccer has an incredible opportunity towards significantly chipping away at that goal.